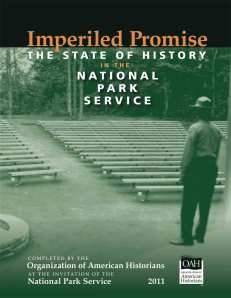 The Organization of American Historians recently completed an evaluation of the “state of history” at the National Park Service.  Four prominent historians–Anne Mitchell Whisnant, Marla Miller, Gary Nash, and David Thelen–led the study, which was based on more than 500 staff responses to an online survey, interviews with current and former staff, site visits, discussions at national meetings, and a review of past studies and reports.

Their analysis revealed that much good work is going on in such areas as reinterpreting slavery and the Civil War, negotiating civic engagement, sharing authority, developing interdisciplinary partnerships, encouraging conversations about history through new media, and collaborating with historians in colleges and universities.  These are presented through a dozen profiles of projects at such National Parks as Manzanar, the Olmsted Center for Landscape Preservation, San Antonio Missions, Harpers Ferry, and the Martin Van Buren National Historic Site.

Although they discovered that good work is being done in a few places, it is not “flowering on the whole” due to several intertwined issues.  Most significant is the report’s contention that, “the agency as a whole needs to recommit to history as one of its core purposes, and to configure a top-flight program of historical research, preservation, education, and interpretation so as to foster effective and integrated stewardship of historic and cultural resources and places and to encourage robust, place-based visitor engagement with history.”  These concerns are presented as a dozen findings, and from my observations, many also reflect what’s happening at historic sites outside of the National Parks.  For example:

To overcome these challenges, they make many recommendations, but felt that two major tactics would have the greatest impact:

If you’re facing similar challenges in interpreting history and promoting historical thinking at your site, you might find the report, Imperiled Promise, quite useful.  Perhaps you’ll want to create your own history advisory board, too!