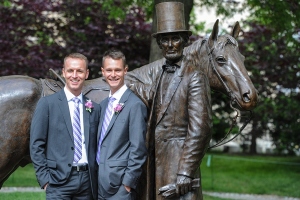 Travis Hollenbeck and Daniel Vukelich not only started a new life together by getting married on April 28, 2012, but they also broke new ground at President Lincoln’s Cottage, a National Trust Historic Site at the Soldiers’ Home in Washington, DC–it was the first wedding held at the site and perhaps the first same-sex wedding at a U. S. military base.  Over 150 friends and family attended.

Hollenbeck and Vukelich chose Lincoln’s Cottage because of its personal connections to them.  Hollenbeck was a combat medic in the U. S. Army and Vukelich the Lincoln-Douglas Debate National Champion while a senior in high school.  It was at the Cottage in the summer of 1862 that the President wrote the Emancipation Proclamation, which significantly expanded civil rights in the United States.

As ground-breaking as this event might be, what’s surprising is how little attention it garnered.  It’s only been reported in a few places, mostly LGBT-oriented press such as the Washington Blade.  I only encountered it when it ran in the Washington Post in the wedding section on September 9–more than four months after the event!  I remember it was just a couple years ago when the National Trust was struggling with the decision of  allowing a gay wedding at one of their sites, and now it seems to be a non-issue.  Has your board taken a position on whether to allow or deny a gay wedding at your site or do you just treat it as another rental event?  When did your historic site or house museum host its first same-sex wedding?