Last year, the National Trust for Historic Preservation adopted a new Collections Management Policy (CMP) and widely promoted it at professional conferences and in national publications as a model to house museums and historic sites to resolve some of their stewardship challenges. At its heart is,

“a new approach—one that treats the historic structures and landscapes, and the object collections, as being the same type of resource. This approach places the historic buildings and landscapes on a par with objects and documents, strengthening the interconnected stewardship and interpretation of these historic resources.”

It’s a good idea but it’s not a new approach. 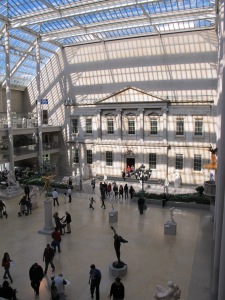 American Wing at the Met featuring the facade of the 1822 Branch Bank of the United States.

Early in the twentieth century, museums of various types began collecting buildings. Henry Ford moved Edison’s laboratory and the Wright Brothers bicycle shop to his Greenfield Village, John D. Rockefeller quietly bought dozens of buildings to create Colonial Williamsburg, and the Metropolitan Museum of Art installed the facade of the Branch Bank of the United States as the featured object of its 1924 American Wing. Much later, landscapes were considered worthy of preservation and now most historic estates, such as Casa del Herrero, Miller House and Garden, and Marsh-Billings-Rockefeller National Historical Park, treat their gardens and landscapes with the same respect as the furniture and art works at their sites.

The National Trust’s rationale for their new approach is that, “conflicts between END_OF_DOCUMENT_TOKEN_TO_BE_REPLACED

The annual meeting of the American Association for State and Local History always covers a diverse range of topics, but collections management is certain to be among this.  This year in St. Paul was no exception and three very different projects caught my attention. 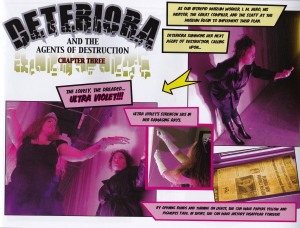 “Deteriora and the Agents of Destruction” by the Indiana Historical Society.

In a poster session, Tamara Hemmerlein shared Deteriora and the Agents of Destruction, a publication of the Indiana Historical Society.  Presented as a “living graphic novel,” it informs readers about the various ways to preserve collections from light damage, pests, dust, and mishandling (represented by such villians as Ultra Violet, Mass-O-Frass, and Miss Handler) and includes links for additional information.  I’m not sure of the intended audience, but it’s a lot more fun than reading a collections management policy.

Chatting in the hallway, END_OF_DOCUMENT_TOKEN_TO_BE_REPLACED