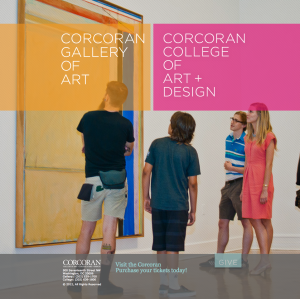 The recent news that the Corcoran in Washington, DC, will be mostly dissolved and its parts distributed to the National Gallery of Art (NGA) and George Washington University (GWU) is generating lots of discussion on whether this is a good thing or not, and who should take the credit or blame.  For those unfamiliar with the Corcoran, it’s an unusual museum because it’s a combination of art gallery and art college.  Students use the art collection for study and inspiration, and the art gallery exhibits student and faculty artworks along with historic American paintings and sculpture, connecting past and present.  It’s a great approach for providing a rich environment for the study and appreciation of art for both students and the public.  Other museums have followed similar paths to create deeper places of learning, including the Henry Ford Museum with its charter school, the Academy of Natural Sciences in its merger with Drexel University, and the American Museum of Natural History offering a Masters of Arts in Teaching.  Yes, museums and historic sites can offer more than just an hour-long tour or a morning field trip.

The Corcoran was created in the Gilded Age, the era of the first major public museums.  Unlike its contemporaries such as the Boston Museum of Fine Arts and the Metropolitan Museum of Art, the Corcoran seems to have gone asleep in the mid-twentieth century and like Rip Van Winkle, it couldn’t wake up.  It made attempts to move out of its slumber, including some controversial exhibits and a Frank Gehry-designed addition, but the CEO’s office turned over continuously; it ran multi-million deficits for years; alienated students, donors and supporters; prompted independent alternative groups such as “Save the Corcoran”; was unable to get much traction on deferred maintenance; and couldn’t seem to figure out what it wanted to do.  In its effort to survive, the Corcoran leased or sold its property, fired and laid-off staff, considered moving, explored a partnership with the University of Maryland, sold collections, and hired lots of consultants.  It’s certainly had more than its share of woes, both self-inflicted and not (even experiencing the strange death of its director of finance).  For more details, see “A Timeline of the Corcoran Gallery of Art’s Troubled History” or “Painting by Blunders.”

It’s all quite overwhelming so you may want to start with David Montgomery at the Washington Post, who provides a useful overview of what happened between the Corcoran, National Gallery of Art, George Washington University, and the University of Maryland in the last few months.  It’s clear that some details still need to be figured out (such as the disposition of the collections, what happens to the historic building, and how to distribute revenues from recent multi-million dollar sales) and surprisingly some very small piece of the Corcoran may survive as a nonprofit organization dedicated to art (if it’s able to extricate itself from founder’s restriction that it remain a gallery).

Whether you’re a boardmember, CEO, curator, educator, or collections manager, you’ll want to see how this story unfolds in the next few months.  While those discussions are happening behind closed doors, the talk on the street is about the causes and results of this decision.  Here are some diverse opinions:

As a consultant who works with historic sites and museums across the nation, it seems the cause of its problems are misplaced.  Although fingers are often pointed at finances or attendance, those are usually symptoms of much deeper issues.  This seems to be true of the Corcoran and as observer during the past few years, it seems the most significant causes are:

A bigger discussion is whether the fate of the Corcoran (or any museum) is a loss or a gain for Washington, DC and the nation.  The major parts (collections, school, building, students, maybe staff) are being absorbed by other educational and cultural institutions and strangely some small part of the Corcoran is supposed to continue as an arts advocacy organization.  But is this a heroic effort to save a venerable but unsustainable organization or is it the loss of another independent voice and perspective, much like the consolidation of newspapers?  Does the addition of the Corcoran to GWU and NGA help further their mission and strengthen their impact?  Tyler Green at ArtInfo explores some of these issues in “What the Corcoran Collection Could Mean to NGA” and “What Would a Post-Corcoran NGA Look Like, Do?”  Utimately, it depends on how you view the role of museums and schools in the 21st century (is collecting, preserving, and interpreting a “means” or an “ends”?).