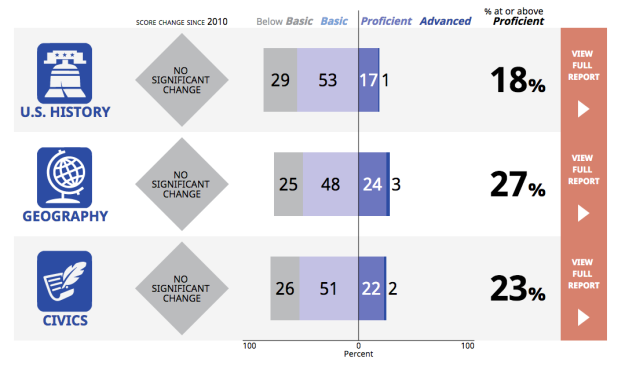 Average score changes between 2010 and 2014 in NEEP at grade 8 by subject. To view the full report, go to NationsReportCard.gov.

The National Center for Education Statistics, which administers National Assessment of Educational Progress (NAEP, also known as the Nation’s Report Card), recently announced that overall academic performance of eighth-graders in U.S. history, geography and civics has remained unchanged since 2010, though Hispanic students have made gains in U.S. history and geography.

NAEP reports performance using average scores and percentages of students performing at or above three achievement levels: Basic, Proficient and Advanced. The Basic level denotes partial mastery of the knowledge and skills needed for grade-appropriate work; Proficient denotes solid academic performance; and Advanced represents superior work. The assessment is based on nationally representative samples of more than 29,000 eighth-graders in total across the country.

The 2014 results for U. S. history show that 18 percent of eighth-grade students performed at or above Proficient, which is basically unchanged from 17 percent in 2010 and 2006. There are significant differences by ethnicity:

and by the parents’ educational level:

Before you become too concerned about the failure of American education, be aware that the scope of U.S. history topics in the NAEP is big: