“I cannot live without books,” said Thomas Jefferson in this letter on display at the New-York Historical Society.

Did you know that one of the largest collection of manuscripts related to Thomas Jefferson are in Massachusetts, not Virginia? And for a few months, 36 of these documents and artifacts are on display in Thomas Jefferson: The Private Man at the New-York Historical Society. It’s not much but it’s amazing.  I’ve read about them over the years and sometimes seen images, but there’s nothing like seeing Jefferson’s actual garden book, his last letter to John Adams, his sketch of a slave cabin, manuscript leafs from his Notes on the State of Virginia, early drawings of Monticello, a copy of the Declaration of Independence in Jefferson’s hand, and the oft-quoted letter that states, “I cannot live without books.” Cool!

“Thomas Jefferson: The Private Man” at the New-York Historical Society.

So how did they get to Massachusetts?  President Jefferson’s granddaughter, Ellen Wayles Randolph, married Joseph Coolidge of Boston in 1825. Their son purchased Jefferson’s documents from the Randolph family in 1898 and donated them to the Massachusetts Historical Society, where he was a member.  The collection continued to grow with gifts from subsequent generations and are now digitized and available online thanks to a grant from Save America’s Treasures (a superb funding program that was eliminated by President Obama in 2010, alas). 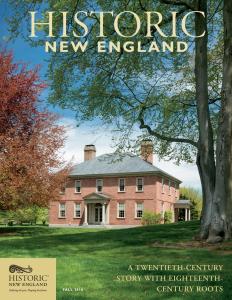 But the ties between Massachusetts and Virginia continue. Their granddaughter, Dr. Catherine Coolidge Lastavica, loved the family history so much that in 1968 she built the Brick House on the family estate in Manchester, Massachusetts, modeling it on the George Wythe House in Williamsburg, Virginia—that’s where Jefferson studied law under Wythe’s tutelage. Historic New England recently accepted the Brick House as a study property and conference facility in partnership with the Thomas Jefferson Memorial Center.  Wow, what a small world.