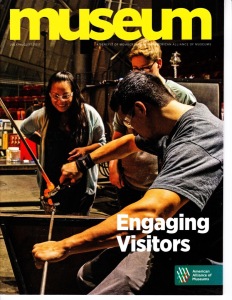 The July/August 2017 issue of Museum, the magazine of the American Alliance of Museums, features articles on engaging families, veterans, and LGBTQ audiences and my general article, “A Visitor’s Perspective on Visitor Engagement”. It introduces three major factors that influence visitor engagement at museums: convenience, novelty, and values. I had a limited space so I’d like to share a bit more information about the influence of convenience, the idea that the more convenient it is to visit a museum, the more likely that people will visit. It’s not just about living close by but also other effects, such as traffic, roadway patterns, museum hours of operation, finding a place to park, and ease of purchasing tickets. Nevertheless, distance is a major factor and you can see it through mapping.

In my article I referenced a couple of my clients—Cliveden (Philadelphia) and Caramoor (Katonah, New York)—and described the differences in their program participants or supporters.  Below I’m showing these differences through maps created in ArcGIS. Each red dot represents a household and for Cliveden, the map shows that the majority of their supporters live within a 30-minute drive of the site. For Caramoor, the map shows that the majority also live within 30 minutes but there is a significant number who live within 45 minutes to the south (and very few to the north). As you can see, the distance of the audience varies (in other words, the meaning of “convenience” varies). Every place is different and you have to analyze your own data to fully understand it.  As I mention in my article, convenience is also affected by novelty and values, which might explain the clustering.

Drive times from Cliveden (left) and Caramoor (right) are shown in graduated drivetimes of 30, 45, and 60 minutes.

This type of mapping also pokes a big hole in one of the most common refrains I hear at museums: “we get visitors from every state in the nation.” Unless that’s your engagement goal, it’s a nonsensical recognition of success. First of all, it’s more likely that a site’s visitors are local, not national, so they’re overlooking the obvious audience for repeat visitation and support. By mapping your visitors and supporters, you can make better decisions about promotion, programming, and fundraising. Secondly, this statement creates a false sense of success. It’s been said numerous times that attendance shouldn’t be the only measure of success and yet it often is. More important is the impact that the history of your site has had on the people who visit. If the significance of your site is insignificant to the people who visit, perhaps it’s time to rethink your purpose and goals. 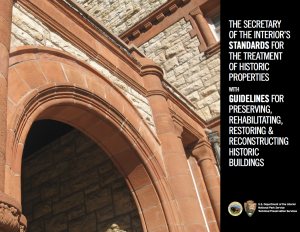 The National Park Service has issued an updated version of the Secretary of the Interior’s Standards for the Treatment of Historic Properties with Guidelines for Preserving, Rehabilitating, Restoring, and Reconstructing Historic Buildings (whew!).  Last revised in 1992, it was recently updated as part of NPS’s “A Call to Action: Preparing for a Second Century of Stewardship and Engagement”.

The revised standards more fully develop topics in the previous editions, address the treatment of buildings of the last half of the twentieth century (which introduced new materials and systems, such as composites and curtain walls), include building code-required work, and eliminated energy efficiency (which is now addressed in 2011 in the Guidelines on Sustainability for Rehabilitating Historic Buildings).  The Standards provide guidance for the maintenance, care, or remodeling that might occur through an illustrated set of recommended or discouraged practices easily understood by architects, contractors, staff, and board members. A big thanks to NPS and Anne Grimmer for providing these new guidelines.  They’re free online and every house museum in America should adopt these Standards to help preserve and maintain their buildings and structures.

The Standards are designed to guide work on buildings listed on the National Register of Historic Places, but I’ve used them END_OF_DOCUMENT_TOKEN_TO_BE_REPLACED 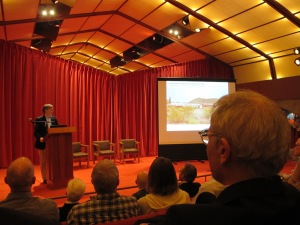 The Frank Lloyd Wright Foundation recently released the Preservation Master Plan for Taliesin West, a National Historic Landmark, which was established in 1937 as Frank Lloyd Wright’s winter home and studio, and the campus of the Frank Lloyd Wright School of Architecture. As part of the Bruce Brooks Pfeiffer lecture series, T. Gunny Harboe, preservation architect and founder of Chicago-based Harboe Architects, and the plan’s primary author, will present the major points of the Taliesin West plan on Monday, November 16 at 6:30 p.m. at the Museum of Modern Art in New York City.  The lecture is free and reservations are not required.

I had an opportunity to use with the Preservation Master Plan as part of the interpretive planning work I’m doing at Taliesin West and it was immensely helpful in clarifying the significance and integrity of the many buildings at the site through a set of tiered levels: END_OF_DOCUMENT_TOKEN_TO_BE_REPLACED