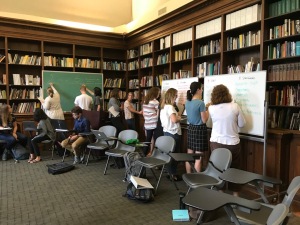 In my “Introduction to Museum Management” course at George Washington University, we spend an entire day on the purpose and value of mission statements, which is prompted by a wide-ranging set of readings:

Each of the readings prompted a list of principles and practices for mission statements, which they used to assess a set of 20 randomly-selected mission statements from museums in the United States.  Based on their analysis, they identified the following mission statements as models of excellence (in alphabetical order): END_OF_DOCUMENT_TOKEN_TO_BE_REPLACED

The Old Salem Museums and Gardens Board of Trustees accepted the resignation of President and CEO Lee French and appointed Ragan Folan to replace him, effective February 1, 2012. Ms. Folan, a leading community volunteer, has been actively involved with Old Salem as a member of the Board of Trustees since 2005 and as Chair of the Board since May 2010. She chaired the Strategic Planning Task Force that developed the Long Range Strategic Plan currently being implemented. The Board elected Tony Furr, past Chair, to fill her term as Chair through May 2012. Located in North Carolina, Old Salem consists of two museums–the Historic Town of Salem and the Museum of Early Southern Decorative Arts (MESDA)–along with award-winning heirloom gardens.

Lee French, who leaves the historic museum after five-and-a-half years of successful leadership, informed members of the executive committee of the Board some months ago that he desired to leave OSMG to explore other professional objectives and to satisfy some personal goals.  “Based on a number of factors that include personal, professional and family objectives, I decided some months ago to END_OF_DOCUMENT_TOKEN_TO_BE_REPLACED