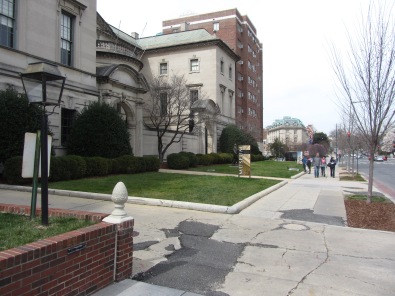 The other week I passed by Anderson House and was so struck by their full-color monument signs that I had to take a closer look.  They’re the common vinyl banners that can be made by nearly every sign and banner store, but they were incredibly neat and clean–none of the usual sagging, wrinkling, and rippling.  Mounted across the top and bottom with Velcro onto a metal frame, the bottom corners of banners are also secured with bolts to keep them from flying away in the wind or easily taken by admiring thief.  The frame is made of square tubing, whose legs slide onto a corresponding set of tubes set in the ground.   Emily Schulz, the deputy director and curator, generously provided more details:

“We installed the banners on the front lawn in mid April 2012, so they’ve been up pretty much exactly one year.  They replaced a small sandwich board sign that was put out every morning and taken back inside when the museum closed each day, which wasn’t that effective as the primary way people walking or driving by found out what we are and when they could visit.  It was also pretty battered after being used for at least fifteen years, from what I can tell.  We wanted signs in the front of the building that were attractive, eye-catching, informative, and didn’t take away from the beauty of the building itself.  We also wanted them to remain up even when the museum wasn’t open, so people going by would know when they could come back and also know that we’re a building open to the public.  We have found that many people—locals as well as tourists—thought the building was just a private club and didn’t know our institution has the public functions of a museum and library that we operate here, so a big part of these signs was to help remedy that.”

“The main thing I would do differently is increase the font size used for the basic information.  We could change that easily enough, though, as they’re not that expensive to have printed (about $100 each).  One other thing we’re still trying to figure out is how to add a piece to the signs to convey to the public when we have a special  program either during or outside our regular hours, or to indicate on the few days a year we have extended museum hours.  Ideally, we will find a way to attach securely to the front or edges of the banners a strip or section of vinyl printed with the pertinent information, but we haven’t figured that out yet.”

“One other thing we’ve done that may not be apparent just by looking at the banners and frames is that the legs of the frames slide out of the ground pretty easily if we’d ever want to remove them from the lawn, whether for storm preparation or some purpose for which we would want the façade of the building more pristine (professional photography, for example).  We’ve slid them in and out just to see how it works, but haven’t had a reason yet to remove them, although I’m glad we can if/when we want to.”

“And I must give credit for their beauty to our director of marketing and communications, Glenn Hennessey, who is a graphic designer by trade and designed the look of them.”

Congratulations to Anderson House on taking vinyl banners to a new level and finding a way to use them so attractively and simply.  A great idea for other historic sites looking for an inexpensive solution to create beautiful signs.

2 thoughts on “Vinyl Banners that Look Sharp, not Saggy”