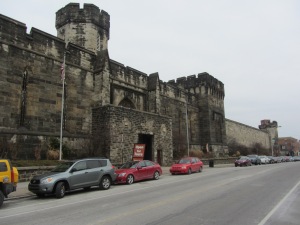 Despite the winter weather, I’ve been traveling extensively this month around the country.  In Philadelphia I finally had a chance to visit the Eastern State Penitentiary, an enormous prison close the city’s art museums but otherwise oh so far away.  When built in the early 19th century, it was the most famous and expensive prison in the world, but after it closed in 1971, it became a forgotten ruin.  Today, a private non-profit organization preserves and manages this National Historic Landmark with an usual mission statement:

Eastern State Penitentiary Historic Site, Inc. works to preserve and restore the architecture of Eastern State Penitentiary; to make the Penitentiary accessible to the public; to explain and interpret its complex history; to place current issues of corrections and justice in an historical framework; and to provide a public forum where these issues are discussed. While the interpretive program advocates no specific position on the state of the American justice system, the program is built on the belief that the problems facing Eastern State Penitentiary’s architects have not yet been solved, and that the issues these early prison reformers addressed remain of central importance to our nation.

In a way, old prisons are historic houses so I’ve been intrigued by the way these popular tourist destinations are interpreted to the public.  Eastern State is a significant contrast from Alcatraz Island, which I visited last year in San Francisco.  Both share a core interpretation around “life as a prisoner” using an audiotour but Eastern State pushes the boundaries by openly discussing race, gender, religion, and sex as distinct topics in their exhibits.  At first I thought their willingness to tackle topics that are usually taboo in museums is due to risks to attract an audience to an otherwise forbidding place but with 200,000 visitors each year, that’s definitely not the reason. The interpretation is thoughtful, not sensational, incorporating multiple perspectives (e.g., prisoners and guards) and linking past and present (e.g., incarceration rates then and now) to create a holistic understanding and contemporary meaning.  Perhaps it’s the setting–an unpleasant prison that once held people who did unpleasant things–that allows for an easier discussion of these topics that might be considered inappropriate in other settings.

If you’re thinking of addressing sensitive or controversial issues in your interpretation, it might useful to visit Eastern State and see how and where it’s handled.  For a taste, here are the opening paragraphs of a couple of their exhibits (topics are further explored in the audiotour):

Racial minorities were always imprisoned at rates higher than White inmates at Eastern State Penitentiary. In fact, this troubling pattern existed throughout the nation, and dates to the earliest years of American history. Eastern State’s first inmate, Charles Williams, was Black. He arrived at Eastern State in October of 1829.

Many visitors are surprised to learn that Eastern State Penitentiary once house female prisoners. Women were always segregated from the men within the prison complex, but prison officials still found it challenging to house women (and sometimes their children) in the midst of this very masculine institution. The last woman was transferred out of Eastern State in 1923.

Like most prisons, Eastern State hired professional staff in the 20th century to address issues of both rape and consensual sex among inmates.

2 thoughts on “Tackling Race, Gender, Religion, and Sex in Prison: Oh My!”