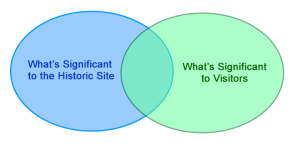 Historic sites are usually skilled at explaining the history of a place, event, or person but when it comes to relevance, it can be a mixed bag.  They often can’t make the leap from sharing information about the site to sharing information that’s meaningful to visitors. Historic sites have important messages to share (i.e., why does this place matter? why is it significant?). They just need to find the spots where it overlaps with issues and topics that are meaningful to visitors (what is significant to them?). That overlap is the “mutual significance” or relevance.

Relevance isn’t about topics that are “interesting.” That’s such a vague term it can be used to describe a Pulitzer prize-winning novel, a Hollywood cocktail party, or a wedding where the groom’s ex-wives are bridesmaids. Relevance isn’t about an amusing fact or story that leaves visitors smiling.  “Relevance” is something that meets current needs in a practical and useful manner. It finds its origins in the Latin word for “lifting, raising, or lifting up,” as in to “lighten a load or burden.”

What are a visitor’s needs? You’ll probably need to do some research. It’ll vary depending on the audience and region of the country, but it’s typically about something happening to them today or foreseeable future, not in the past. How can we make information practical and useful? Model yourself on those who do it well.  I can recommend various historic sites nad house museums around the country that do it well, but it’s near impossible for anyone to visit them all.  Instead, podcasts provide a useful alternative because they’re easily available and offer a variety of approaches.  Among my favorites are:

BackStory with the American History Guys, which featuring historians Ed Ayers, Peter Onuf, and Brian Balogh “tearing a topic from the headlines and plumbing its historical depths.”  Through a nice mix of interviews, discussions, and presentations, these hour-long podcasts look at a contemporary issue in-depth, over three centuries, and from various perspectives, including the history of American political conventions, Republican party, and Alexander Hamilton. At the end of the hour, the past does “catch up with you” and you can make better sense of current events. 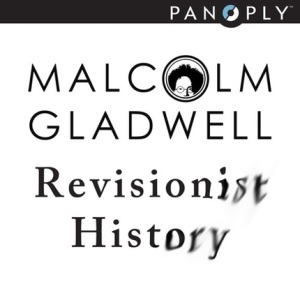 Malcolm Gladwell recently launched Revisionist History as a short-lived weekly podcast—just ten weeks.  Its goal is to “go back and reinterpret something from the past: an event, a person, an idea. Something overlooked. Something misunderstood.” Gladwell is the author of several bestsellers, including The Tipping Point, Blink, and Outliers, so he brings the same tools from psychology and sociology to historical interpretation “because sometimes the past deserves a second chance.”  Its first episode discussed artist Elizabeth Thompson’s surprising inclusion in a Royal Academy exhibit followed by her unsuccessful effort to join the Royal Academy. Gladwell connected to a modern theory called “moral licensing” and how it affects other situations. Revisionist History has already hit the top of the iTunes charts, so you’ll want to check it out (it ends in two weeks!).

Slate Magazine is getting ready to launch Placemakers with Rebecca Sheir on August 1, which will “bring you stories about the spaces we inhabit and the people who shape them.” Sheir always seems to be doing interesting work for Morning Edition, All Things Considered, and The Splendid Table, so this bodes well for those who work at historic sites or in historic preservation.  Happy listening!

If you have recommendations for other podcasts that make history relevant by connecting the past to present-day interests or events (not just about historical events, people, or places), please share them in the comments below.

2 thoughts on “What Does Relevant History Look Like? There’s a Podcast for That!”