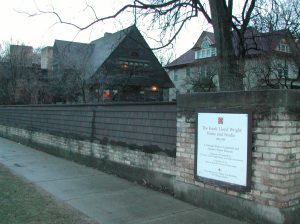 On Monday, the National Trust for Historic Preservation sold Frank Lloyd Wright’s Home and Studio in Oak Park, Illinois but don’t worry, it’ll still be preserved and open to the public.  It was acquired by the Frank Lloyd Wright Preservation Trust, who has been operating and managing the site for nearly four decades and I suspect will be there for many more.  In the 1970s, the FLWPT was a fledging organization that was attempting to save the Prairie-style home and studio of Frank Lloyd Wright, which had become badly deteriorated and cut up into a half dozen apartments by a private owner.  It didn’t have the ability to purchase the property when it came up for sale, so they partnered with the National Trust to buy the property.  The FLWPT would eventually repay the National Trust for its half of the $260,000 purchase price but in the meantime, the National Trust would hold the title and lease it to the FLWPT at a nominal price.  The success of this venture prompted these two organizations to partner on the preservation of the Robie House, a Frank Lloyd Wright masterpiece which is owned by the University of Chicago but was badly maintained (another example of a university mistreating historic places!).  With the sale of the Home and Studio, the Robie House partnership is also concluded and the FLWPT will work directly with the University.

I’m not sure what the change in relationship means, but just a few days ago, the Robie House and Frank Lloyd Wright Home and Studio were National Trust Historic Sites, two of 29 historic places sprinkled across the United States.  It’s a ragtag collection that by itself makes no interpretive sense, doesn’t adequately represent American history or culture, isn’t connected by ownership (some NTHS are owned by others) or management (most NTHS are operated by other non-profits), and wasn’t formed to achieve a specific strategy or vision (they were mostly added as opportunities arose, donors made offers, or presidents were seduced).   But with this transition, I hope it sparks some discussion around two important national issues for historic sites: END_OF_DOCUMENT_TOKEN_TO_BE_REPLACED